From the middle of the 19th century until the early years of the 20th century, Manuel Y. Ferrer was a prolific composer and arranger for the guitar and mandolin as well as a virtuoso guitarist and respected teacher . Although little known today, except in classical guitar circles, Ferrer must rank as one of the most influential American guitarists.

Manuel Ygnacio Ferrer was born around 1832 in San Antonio in Baja California (Mexico) of Spanish parents. Ferrer displayed musical talent from the young age of four years and began serious study of the guitar only a little later1. When he was about eighteen years old he travelled to Santa Barbara  in California. In the Santa Barbara mission Ferrer became acquainted a priest who provided him further instruction on the guitar. In 1850 Ferrer moved to San Francisco where he continued to study the guitar and began to gradually build a musical reputation. His public debut at a guitar concert took place on September 18, 1854 at the Metropolitan Theatre in San Francisco.

Ferrer continued to perform and teach in San Francisco for a period of fifty years. His wife, Jesusita de Vivar, and several of his children were also talented musicians. Ferrer and his family toured in the eastern United States in 1891 and even performed in the White House. 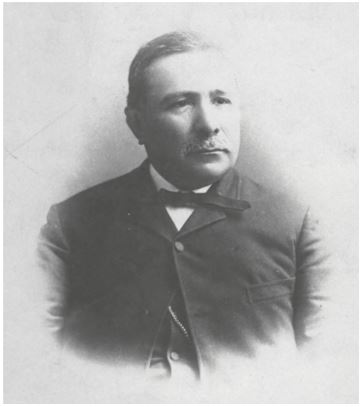 In the early 1880's Ferrer was also one of the earliest teachers and composers of mandolin music in the United State. In a 1905 article in the Music Trade Review the following comments were made concerning Ferrer:

"Manuel Y. Ferrer, the late eminent guitarist and composer, and Luis Romero, the late gifted guitar soloist, and the writer (Samuel Adelstein), were the three original mandolinists on the Pacific Coast. At that time (20 years ago) there was absolutely no music published for mandolin in this country, no manufacturers of instruments, and in comparison to the population, few or hardly any teachers east of the Rocky Mountains, excepting a few Italians in New York, amateurs in the Latin quarter, who played the mandolin for pastime among themselves."

Ferrer published many compositions and arrangements for the guitar3.  He continued to teach right up to his death in San Francisco on June 1, 1904.

Among Ferrer's students in the latter part of his life was Ethel Lucretia Olcott (later Vahdah Olcott-Bickford), who organized the American Guitar Society in 1923, wrote a description of Ferrer1:

"In appearance Ferrer was short of stature and dark, with small piercing black eyes, and when I knew him, his jet black hair was tinged with grey. He was kind and gentle to a degree and a man of very few words. In his teaching, however, he was very methodical and strict, although not necessarily harsh, invariably playing with the pupil, and though three or four years previous to his death he broke his arm, so that his hand was apparently stiff, he still possessed a wonderful execution. He did not retain the astonishing brilliance and dazzling technique of his youth, as he was a man past his seventieth year then; but to me there is a quality more beautiful and effective than dazzling brilliance - the soulful quality - and Ferrer possessed this in a high degree with a sufficient amount of the former. When Ferrer touched the strings of the guitar the sounds entered the heart, and his chords made music which lifter the soul to a higher plane. One of his favorite solos was his arrangement of a selection from Puccini's La Boheme, which remains in manuscript. His last original composition entitled: Arbor villa, mazurka, was written two years before his death, and is also published, and I am proud to possess a coy written by his own hand. He taught the guitar up to the time of his death, which occurred very suddenly on June 1, 1904. He had gone from his home in Oakland to San Francisco to teach, and gave several lessons, when he suddenly taken ill, and went to the home of his daughter. Later he was removed to the hospital, where he died the same day, his third wife surviving him for several years. Though he lived to a ripe old age, his death was a great loss: but I love to think of him now playing with angelic choirs in the Holy City."

Ferrer is mentioned several times in the Martin archive. One April 3, 1889 C. A. Zoebisch noted the following:

"Mr. Ferrer is in California and a Mexican is of Spanish descent, I helped already twice to present him two fine Concert Guitars."

"Mr. Ferrer complains over the thin D String we sent his daughter (note: probably Adele Ferrer) some time ago, says every D string broke as soon as stretched on the guitar. Please broken 6 successive A Strings which makes me think the silk is of poor quality.

Please see that those I ordered are made of good strong silk."

Ferrer and at least one of his daughters owned and used Martin guitars. Ferrer was prominent in the advertisements for Martin guitar placed by C. A. Zoebisch in the Music Trade Review between 1892 and 1898. In a post card to Martin on January 24, 1893 C. A. Zoebisch wrote "Please send quick 2 doz. D, 1 doz. A & 1 doz. E, thin, same as made before for Miss Ferrer. She doesn't use the 0 (size) A stgs, although she plays a No. 1". Miss Ferrer was most likely Adele, one of Ferrer's musically talented children. No direct correspondence between Ferrer and Martin is in the archive so string orders were probably handled directly by Zoebisch.