This guitar is one of the most historically important Martin instruments in existence! It neatly bridges the gap between the Stauffer-style guitars, that C. F. Martin learned to make in Vienna, and the Spanish-style guitars Martin made after 1839. It is the earliest Martin guitar known with any kind of “Spanish” features. 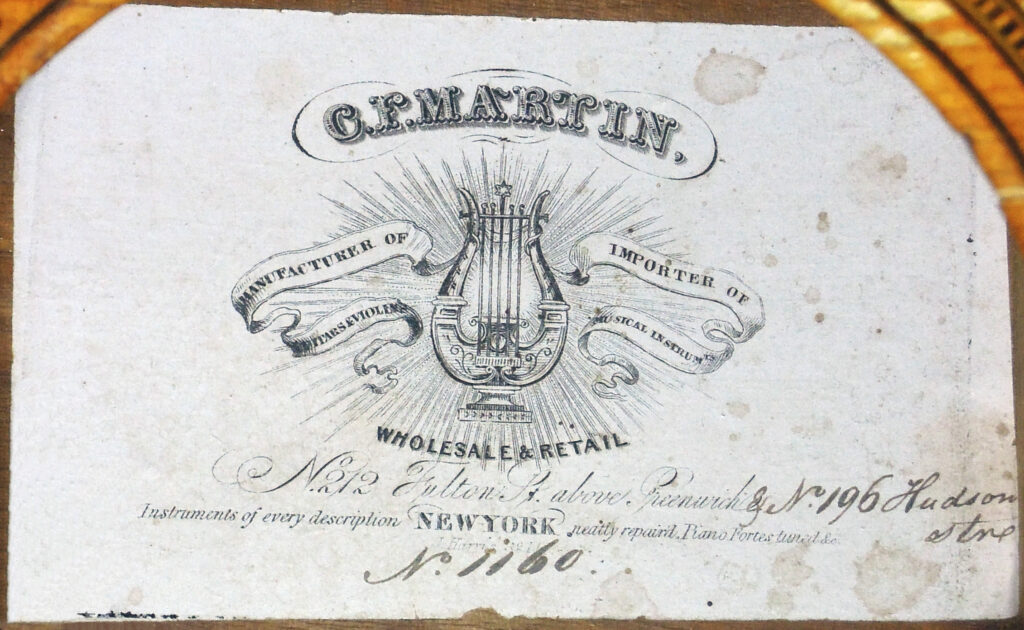 Several Spanish features are noticeable in this guitar, specifically the bridge, bracing pattern and the three-ring sound hole decoration.

The bridge is the earliest tie bridge recorded on a Martin guitar; other Martin guitars from this period usually have a “shield-shaped” pin bridge. The bridge is rectangular in shape with a rounded cross-section and the treatment of the ends of the bridge hints at what would become Martin’s famous “pyramid” bridge, although the nailed-on ivory saddle is a somewhat crude feature. The back edge of the bridge is “scooped-out”, a feature typical of Martin pyramid bridges until the middle 1840's. 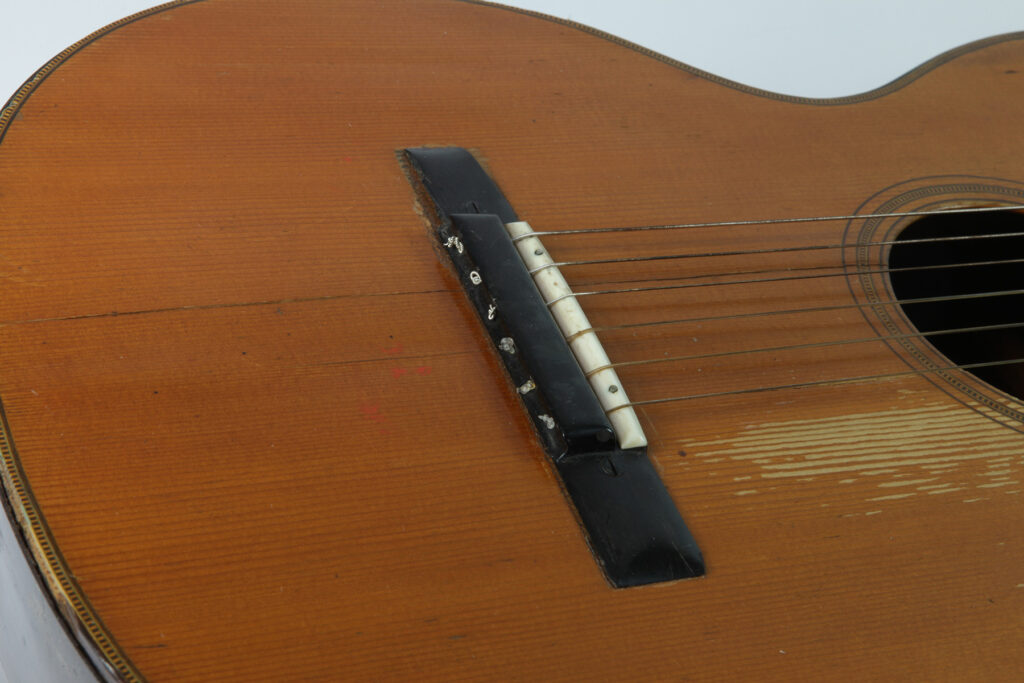 Bridge illustrating the rounded cross-section and scooped-out back edge

An interior shot of the guitar reveals a very surprising bracing pattern. Whereas all other Martin guitars of the period have variations of ladder bracing, this guitar has a three-strut fan brace and a thin bridge plate of mahogany. Three-strut fan brace became a standard feature in Martin guitars after 1840 and until the invention of the early types of X-bracing around 1843, and survived until the end of the 19th century in Martin’s size 3-17 and 2-1/2-17 “student model” guitars.

The fan braces appear to be quite heavy and somewhat crude-looking compared to later Martin fan braced guitars, possibly indicating the prototypical nature of the bracing pattern. 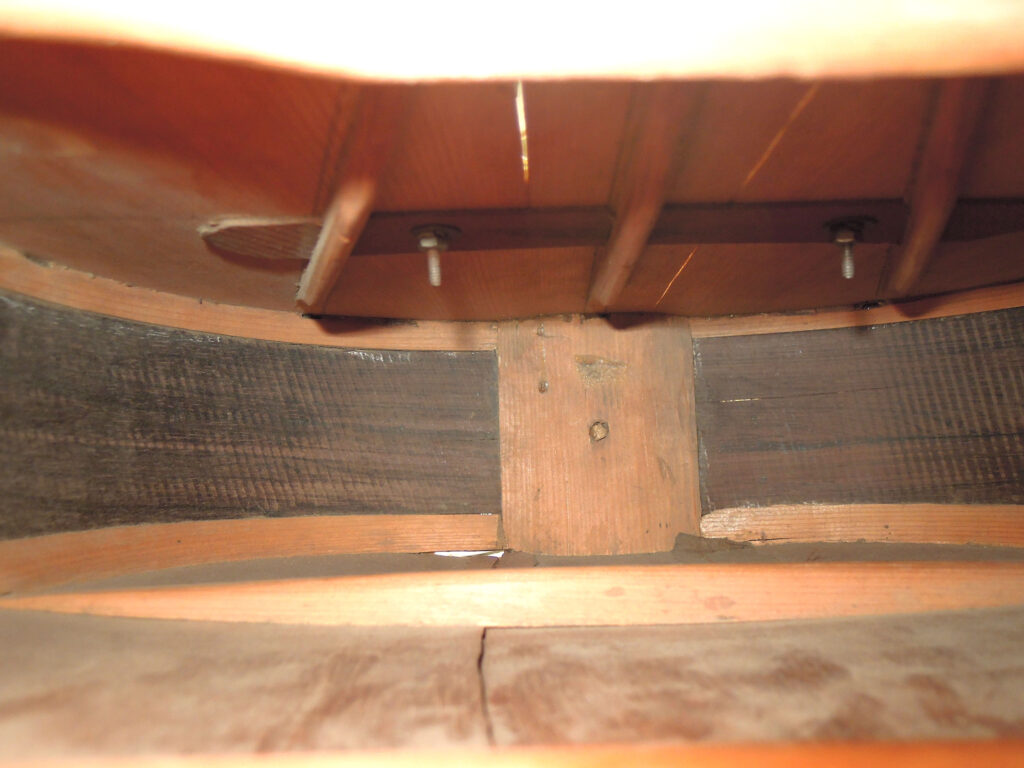 One last feature of note is the radius at the bottom of the fingerboard. This feature has not been seen previously on a Martin guitar.

Most of the surviving 1830's Martin guitars have a neck adjusting screw, elevated fingerboard and “one-side screws”. These are features for Martin’s more expensive guitars but only appeared on about 25% of Martin’s guitars according to the ledger books. The fancier Martin guitars survived at a disproportionally high rate because they were clearly higher value instruments and were treated with more care. Very few plain Martin guitars have survived, so it could be the fingerboard radiused at the bottom was a standard feature for the time on the less costly instruments. More examples will need to be discovered to answer this question. 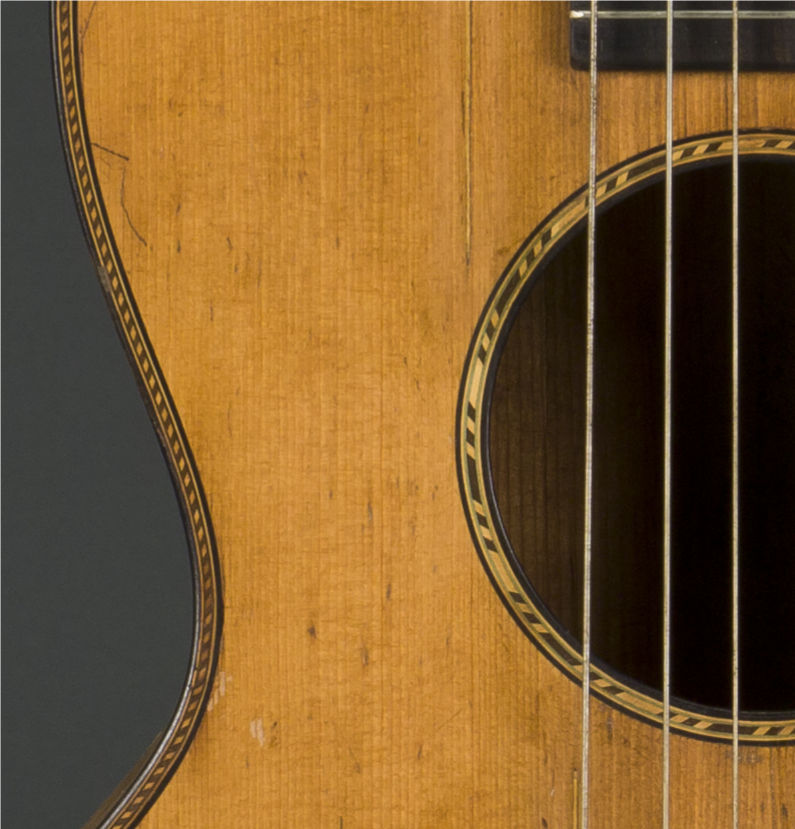 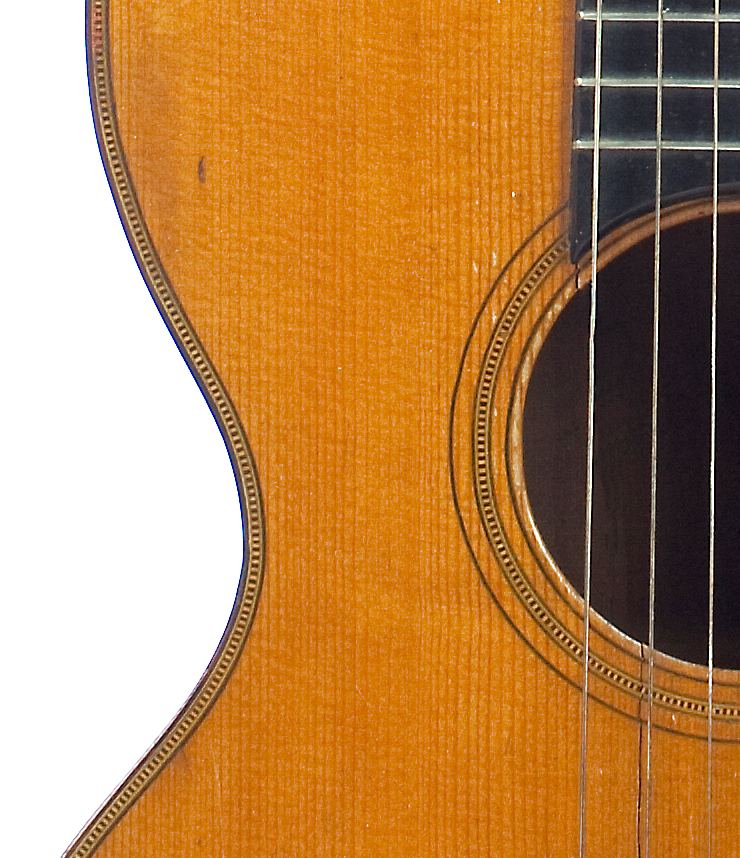 Other features of the guitar are typical of Stauffer-Martin guitars: the almost figure-8 Stauffer-shape of the guitar, the one-piece back, the black neck with an “ice cream cone” heel, “one-side screw” tuning machines and the solid lining joining the sides with the top and bottom of the guitar. 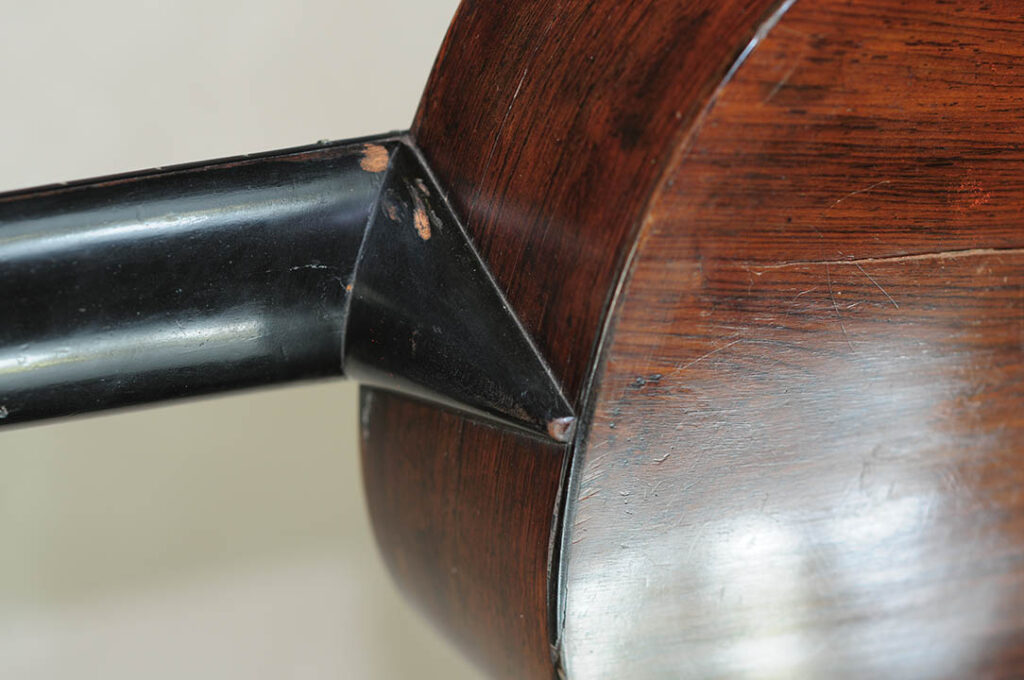 It is possible to assign a date to a particular serial number by closely comparing the serial numbers and actual guitars sales from the ledger books. Based on this research it is very likely this guitar was begun in May 1837 and finished in June. (This theory presumes Martin needed about one month to complete a guitar.)

The ledger books usually provide few clues on the features of any particular guitar. Fortunately, Martin did keep a separate listing of guitars that included fairly detailed descriptions for instruments brought into stock between June and December 1837.

Guitar number 29 from this list was finished on June 28, 1837 and the description reveals it was a rosewood guitar of “bastard” size with a “one-side machines”. This guitar was sold to John B. Coupa on the same day! John B. Coupa was a well know teacher who also gave guitar concerts in New York at the time. Coupa later became a business partner with Martin in 1840 and sold Martin & Coupa guitars out of a depot at 385 Broadway in New York.

Guitar Sold to Coupa with “neck & side screws”

This guitar was also entered in the sales ledger on June 28, 1837 at a price of $20.00. This would have been a wholesale price since no discount was indicated. This price matches pretty well with the typical pricing for a Martin guitar displaying these features shown although the “one-side screw” would certainly have been an extra charge.

It should be of no surprise that this guitar may have been sold to John B. Coupa as he probably special ordered this guitar with the Spanish features it displays. The first mention of “Spanish” guitars does not appear in the ledgers until late December 1837 and most of the early Spanish guitars were sold to John Coupa. Coupa was clearly the primary influence of Martin’s decision to change the style of the guitars he made. A very important guitar indeed!