Here is an example of a very early Martin & Coupa guitar that displays design features associated with the instruments from the first part of the 1840's. (Strictly speaking, it is not a Martin & Coupa guitar, as it lacks the M & C label, but I will use the terminology regardless as it is commonly known that the Martin & Coupa business arrangement ran from early 1840 until May 1850, when John B. Coupa died.) 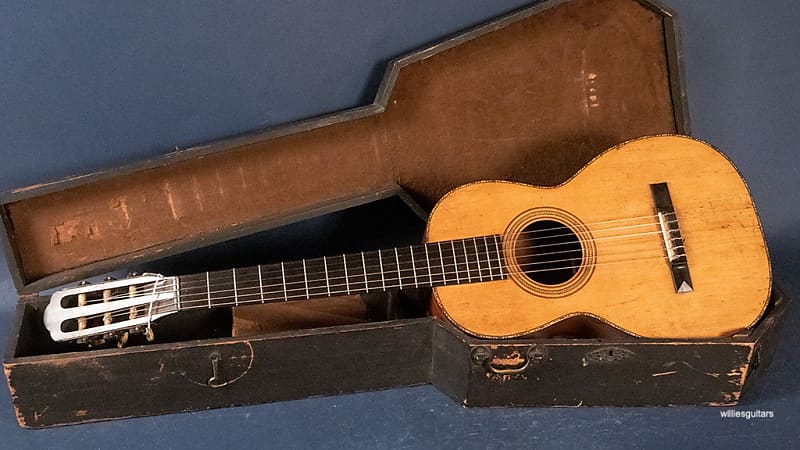 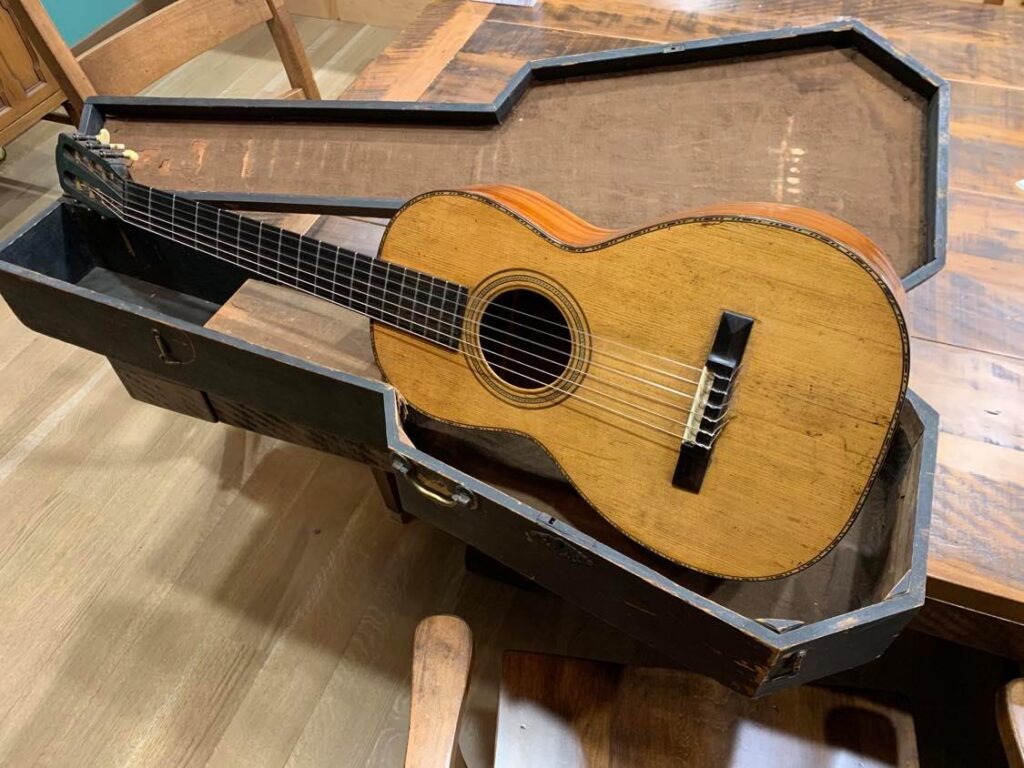 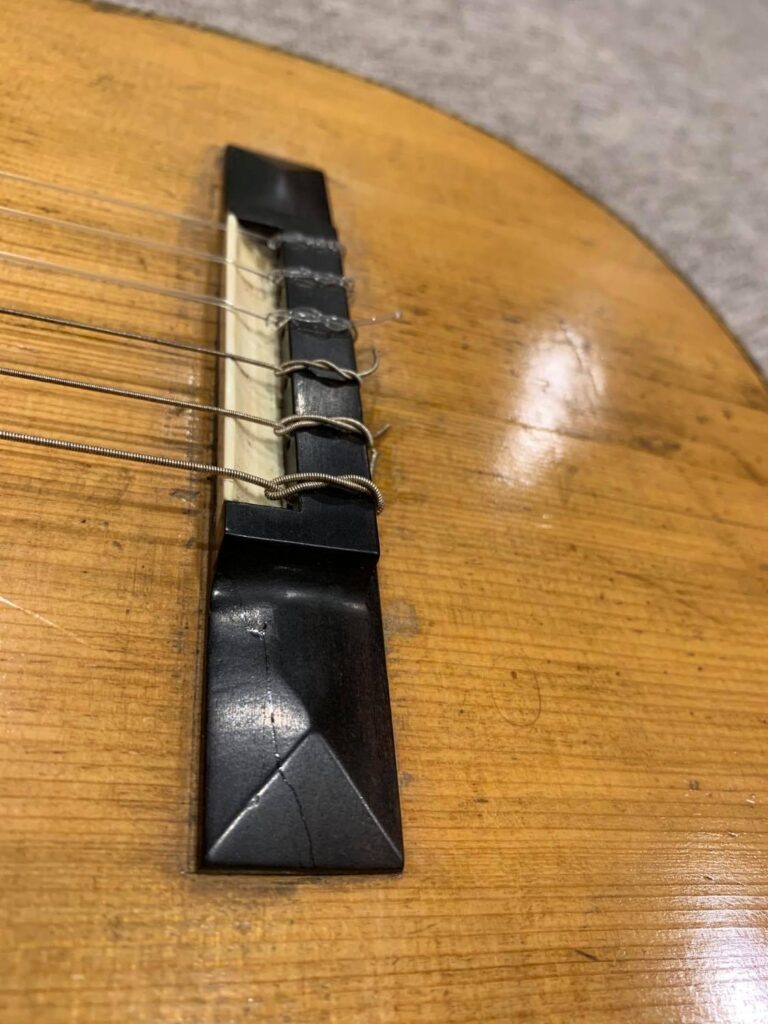 The guitar is mounted with a pyramid tie bridge with an ivory insert saddle. These bridges are always associated with either the 3-strut or 5-strut fan bracing patterns from the 1840 to 1843 period. Once Martin changed over to X-bracing a pyramid pin bridge was used instead. Probably one of the main reasons Martin invented X-bracing was to be able to use pin bridges (drilling holes in a fan braced top often resulted in damage to one or more of the braces.) 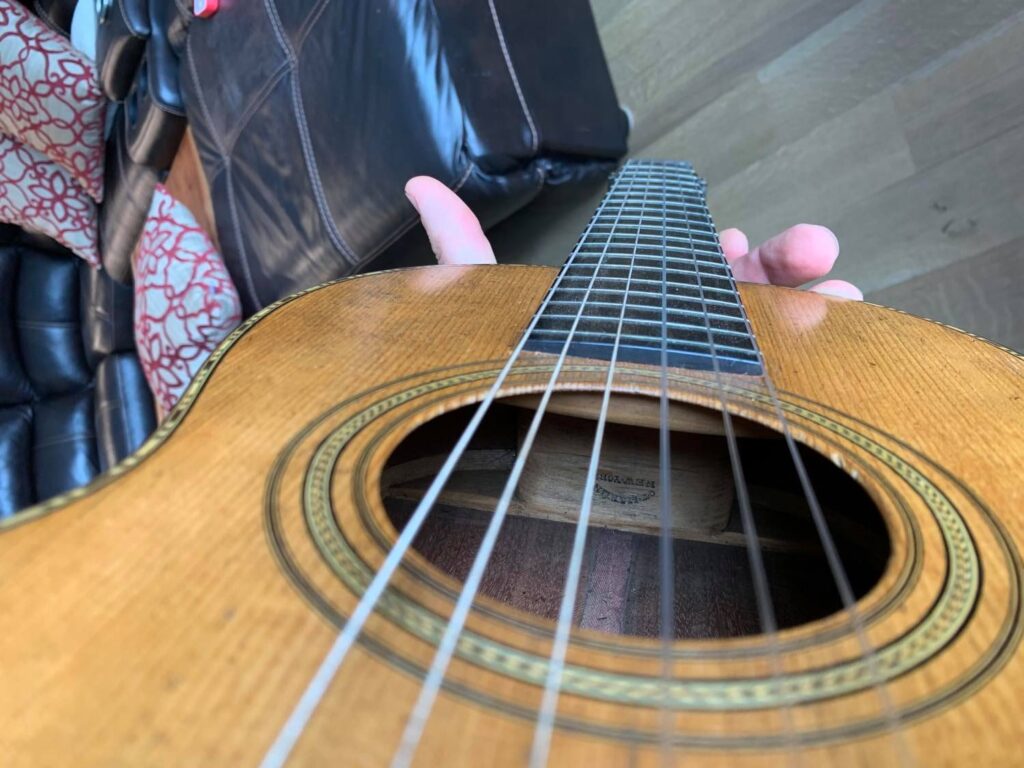 The neck block has a rectangular shape and is closed off at the bottom with a semi-circular piece of spruce. This feature is only seen on early M & C guitars from the 1840 to 1841 period. The relatively thick piece of spruce indicates an early guitar as this piece was reduced in thickness on slightly later guitars. This type of neck block was replaced with a "Spanish foot" for the period from 1841 to about 1850. 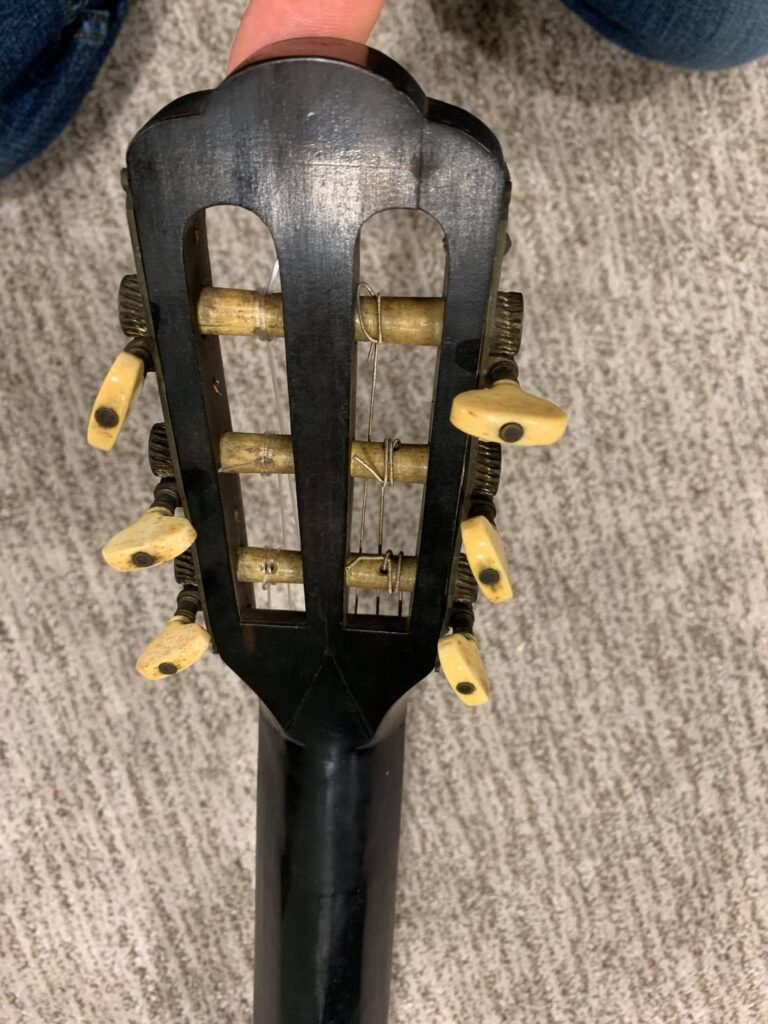 The headstock of this guitar is very unusual for a M & C instrument. It has been re-glued at some point and the finish doesn't look as smooth as the rest of the neck. 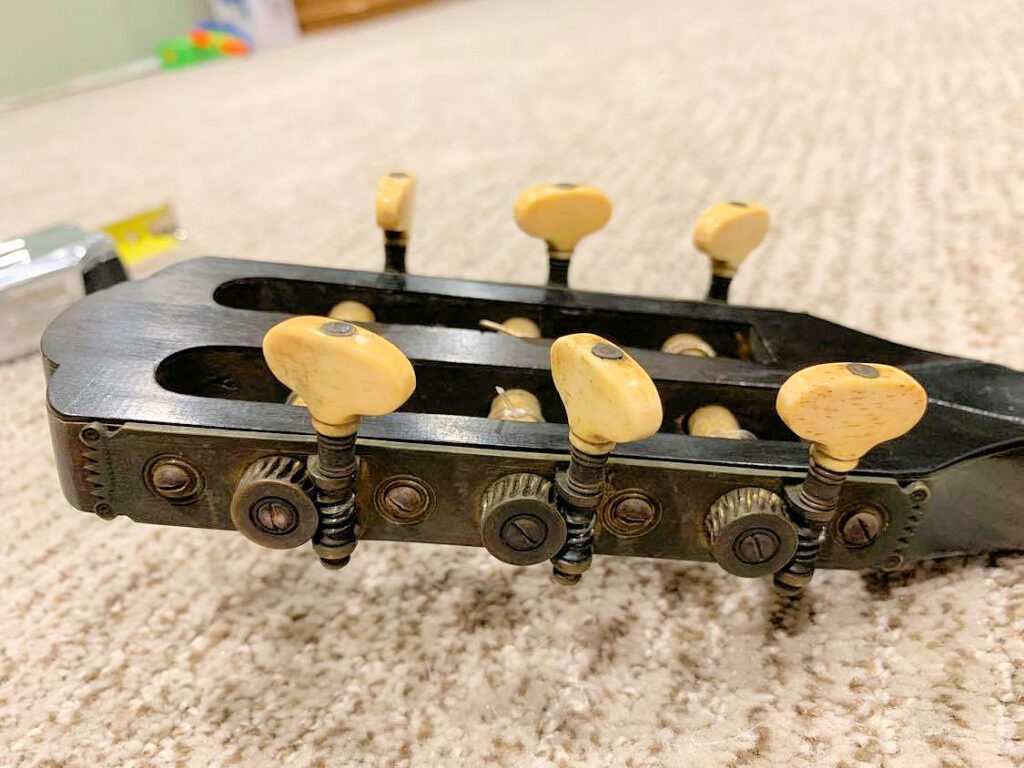 The Jerome tuners are the earliest type with the smooth outside surface to the gear cogs (sometimes called "washer type" for lack of a better term). Most Martin guitars that have survived from 1840 to 1841 period have Stauffer tuners or pegheads with friction pegs. This guitar illustrates the earliest use of Jerome tuners by Martin. The buttons appear to be ivory although they could be bone. The tapered bone string barrels are typical for the time. 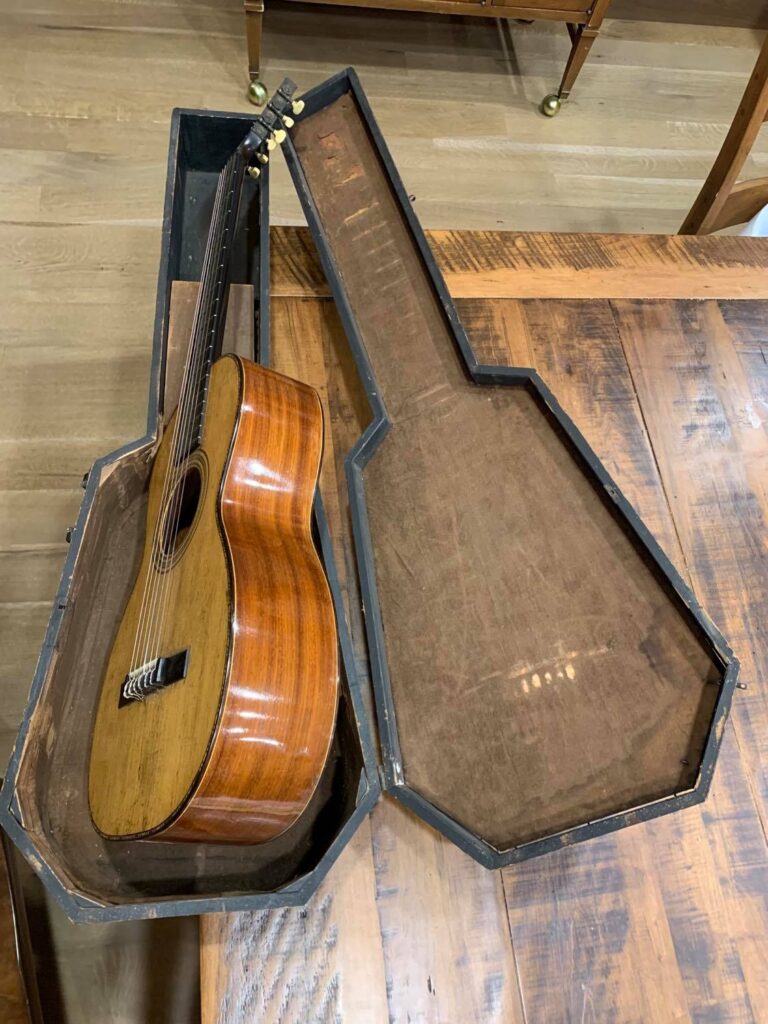 The body and sides of the guitar are not Brazilian rosewood, mahogany or even goncalo alves (known to Martin as zebrawood). The body appears to be pernambuco (Martin used the term fernambuco). The early records do indicate Martin made a few pernambuco guitars up to about 1840 but, since the ledgers for the 1840's are missing, it isn't possible to say if pernambuco was used later. 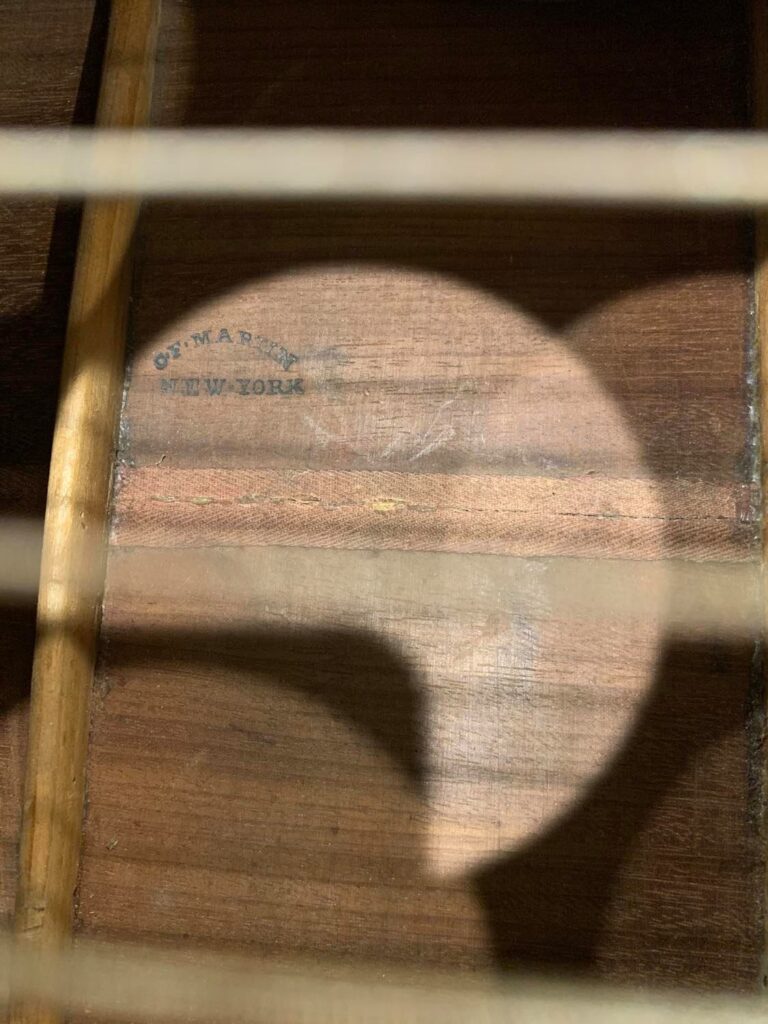 The Martin stamp on the back of the guitar under the sound hole is another early feature. The two-piece back is supported with only a single strip of silk gimp instead of a spruce back strip. 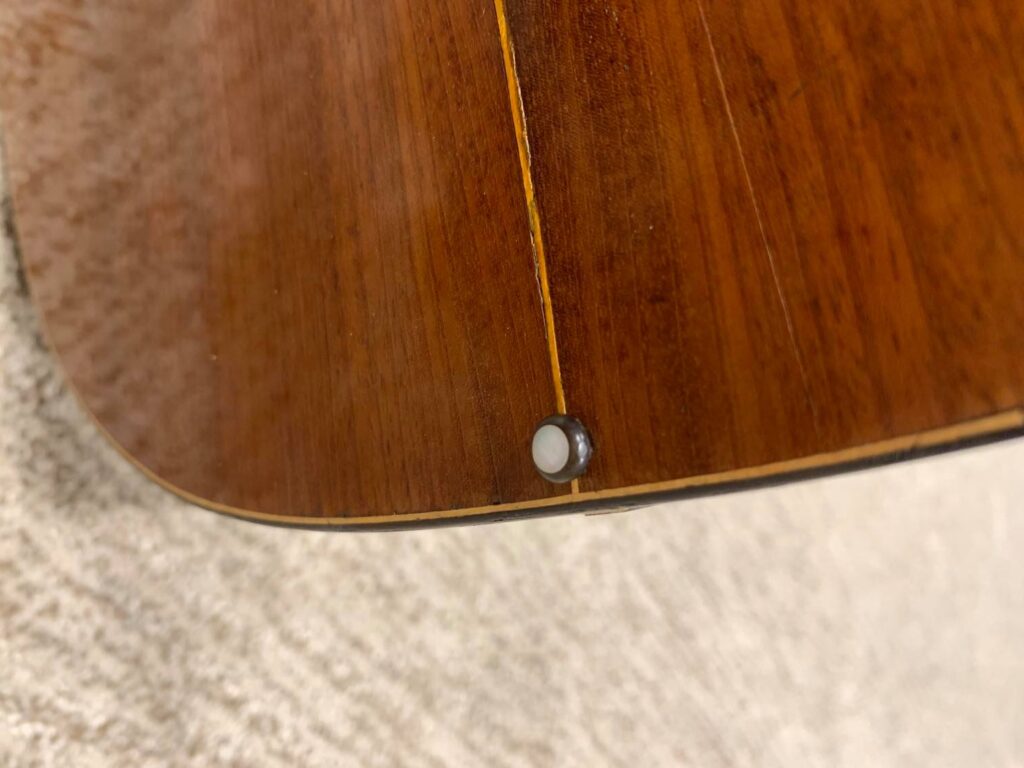 The bridge pin mounted on the lower back of the guitar was used for attaching a "ribbon" or strap. This is also an early feature although the "student" model 3-17 and 2-1/2-17 guitars retained it until quite late in the 19th century. 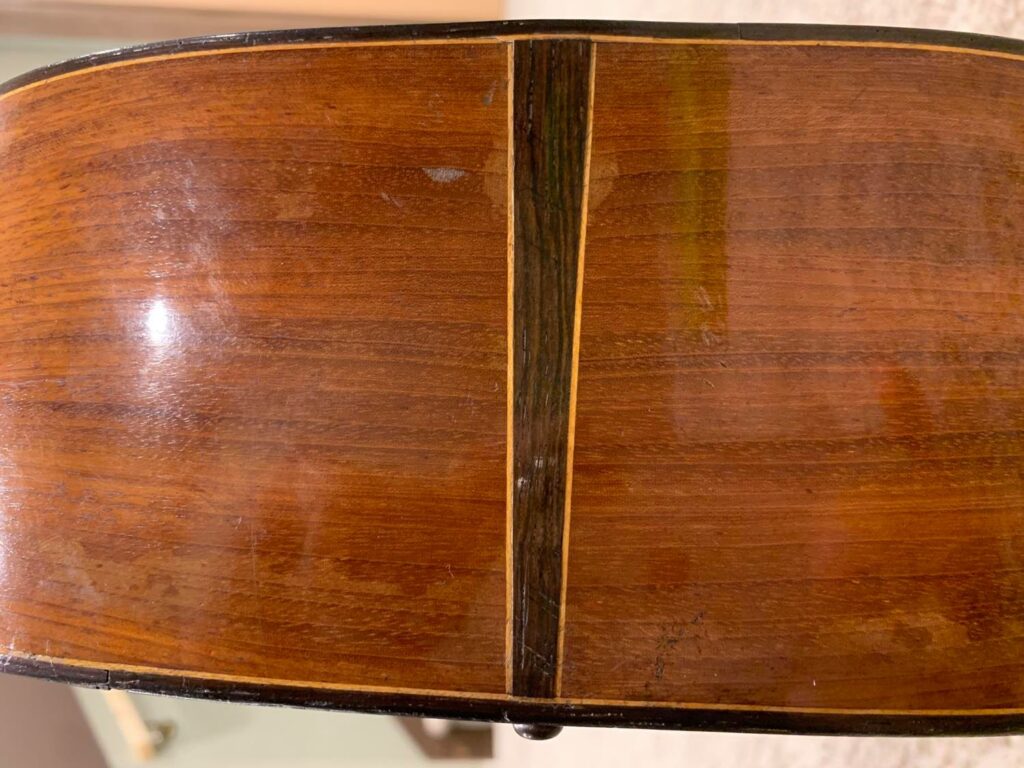 The end wedge of the guitar is a little unusual for the period because of it's trapezoidal shape. Most guitars from this period have a rectangular end wedge. With the use of a bridge pin on the back of the guitar for a strap, there was no need for an end pin. 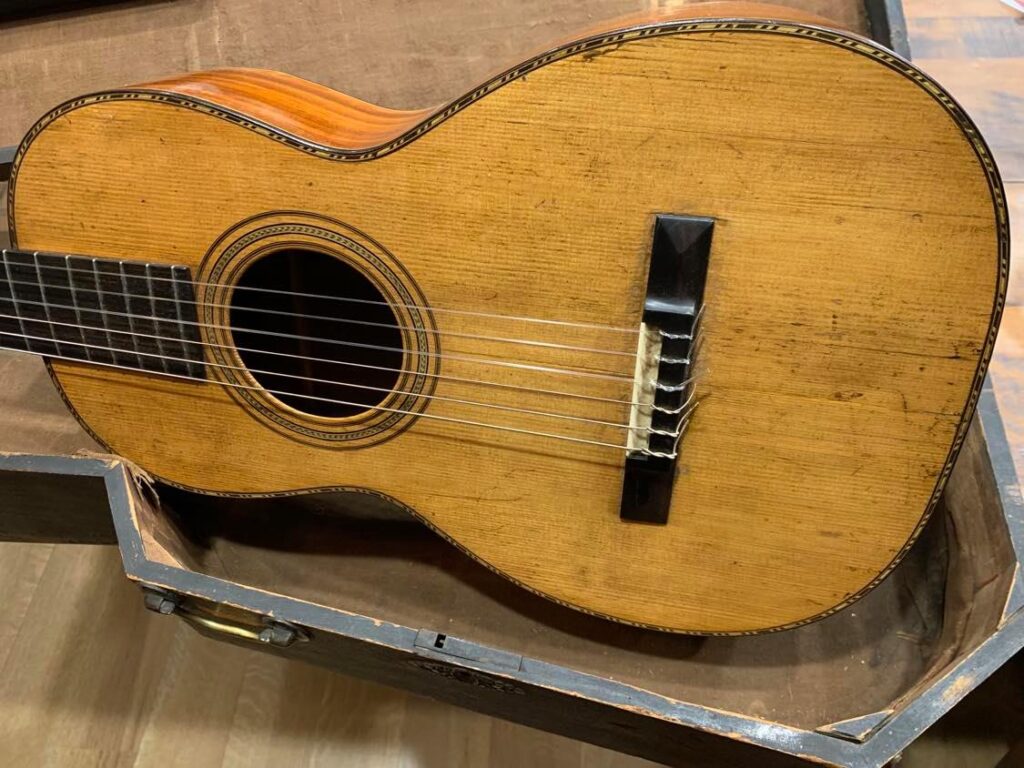 Martin didn't have defined models this early but did have a number of standard models with different levels of decoration and pricing. The purfling and decoration of this guitar was probably for an instrument with a wholesale price of about $24. The single white line under the binding (sometimes termed "fillet" purfling) was later used later on style 24 (and possibly 23) guitars. All in all, this instrument could be considered to be an early version of a style 24 guitar.
The solid lining on this guitar was typical for early Martin guitars until Martin began to experiment with kerfing (dentelles) around 1843. Solid lining was used on the "student" model guitars until the end of the 19th century. 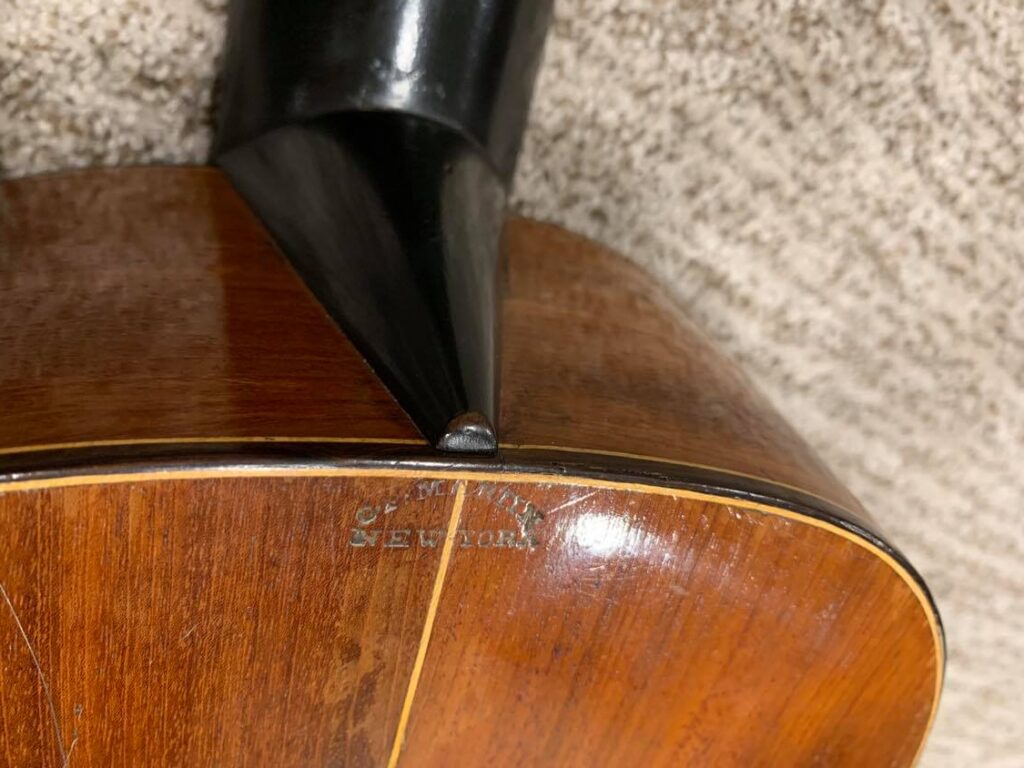