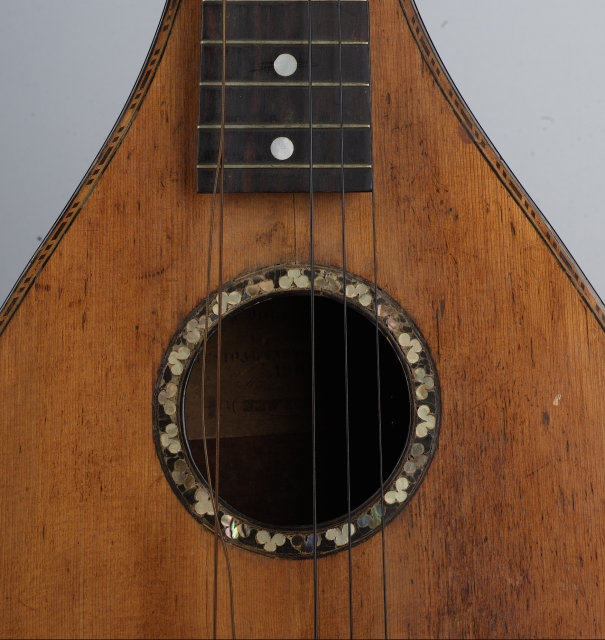 An early Martin ledger book contains an entry for an “Amadill” guitar sold on August 8, 1836.

I have not been able to find any reference to explain the term amadill.  However, I am quite confident that this instrument is the amadill guitar from the ledger, as will be explained. The cittern shape of the guitar is unique in early Martin guitars. The ledger books are quite complete for 1836 to 1838 and should contain a mention of the unusual shape, but the only possibility is the  mysterious “Amadill” guitar.

The best clue is the type 3 “Martin & Schatz” label in the guitar (Martin used 7 different labels between 1834 and 1839). Martin & Schatz had a partnership that lasted from early 1835 to as late as September 1836. Although Henry Schatz appears to have moved to the Cherry Hill PA area by at least April 1836, shipments continued to be sent to Martin & Schatz until September that year.

An interesting feature of the label is the thin strip if paper, probably trimmed from the bottom of the label, that has been carefully pasted over a portion of the label that reads “pupils of the celebrated Stauffer”. This suggests that Schatz had left the partnership and the term “pupils” was no longer needed and fits with the amadill guitar being from late in the Martin & Schatz partnership. Schatz may indeed have already left the partnership by August 1836 but  Martin continued to use the type 3 label as a matter of economy until the type 4 label was available around the end of September 1836.

This guitar displays the first appearance of the “shield” bridge,aAll earlier Martin guitars having moustache bridges. It will be noted that the middle two bridge pins are slightly lower than the others, a typical feature of shield bridges. The ivory decoration beneath the bridge was referred to by Martin as a “flower” or “ornament”.

The Viennese machines (or “one side screws”) are typical of the tuning machines used by Martin from 1834 to the 1850s. Of the 23 guitars I have examined with the Vienna machines almost all have unique engraving patterns and this one is no exception. It has a style of engraving I have not seen before.

As with a number of early Martin guitars this example has an elevated fingerboard and clock key operated mehanism for adjusting the neck angle.

The inlays on the fingerboard and headstock are not original.

The soundhole decoration is typical for early Martin guitars. The tri-lobe shaped inlays were called  “eichenlaub” (or “oak leaf”) by Martins.

The top purfling around the top of the guitar is of a type Martin ordered from a company in Hamburg called Burdorf.

The top originally was braced with simple ladder braces but it appears the lowest ladder brace was either never installed or was replaced with a large straight brace beneath the center line of the top.

Back and sides: Bird’s-eye maple (the back is laminated with what appears to be mahogany)

Top: Very fine grained European spruce (from a supply C. F. Martin brought with him from Saxony in 1833)

Purfling: Martin described this as “fine” purfling. It was purchased from a company called Burdorf in Hamburg.

Binding: Very black color, either a stained wood or possibly even ebony

This guitar is currently in the collection of the Museum of Pop Culture (MoPOP) in Seattle WA although it is not currently on public display.

Some photos courtesy of Vintage Instruments in Philadelphia PA. 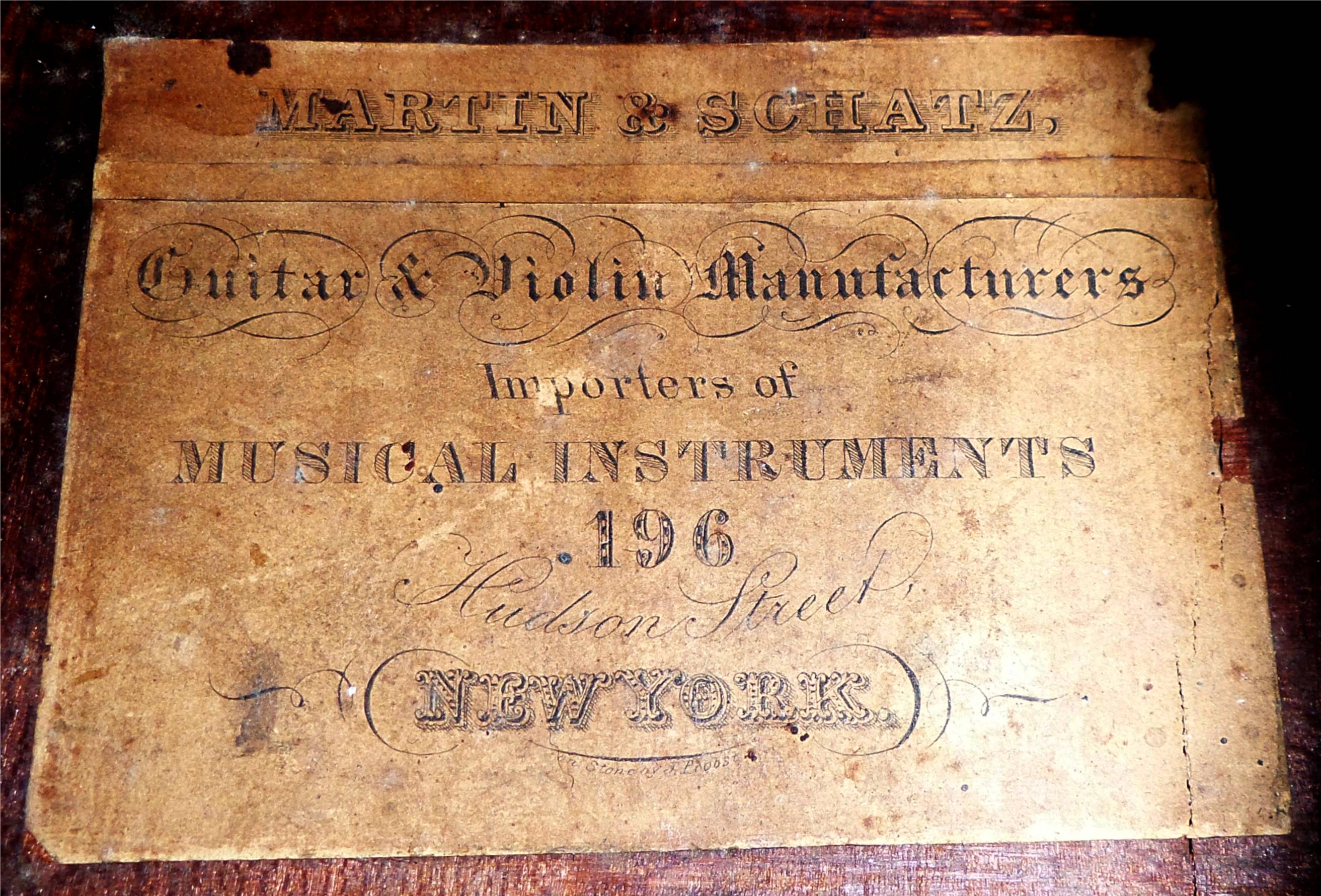 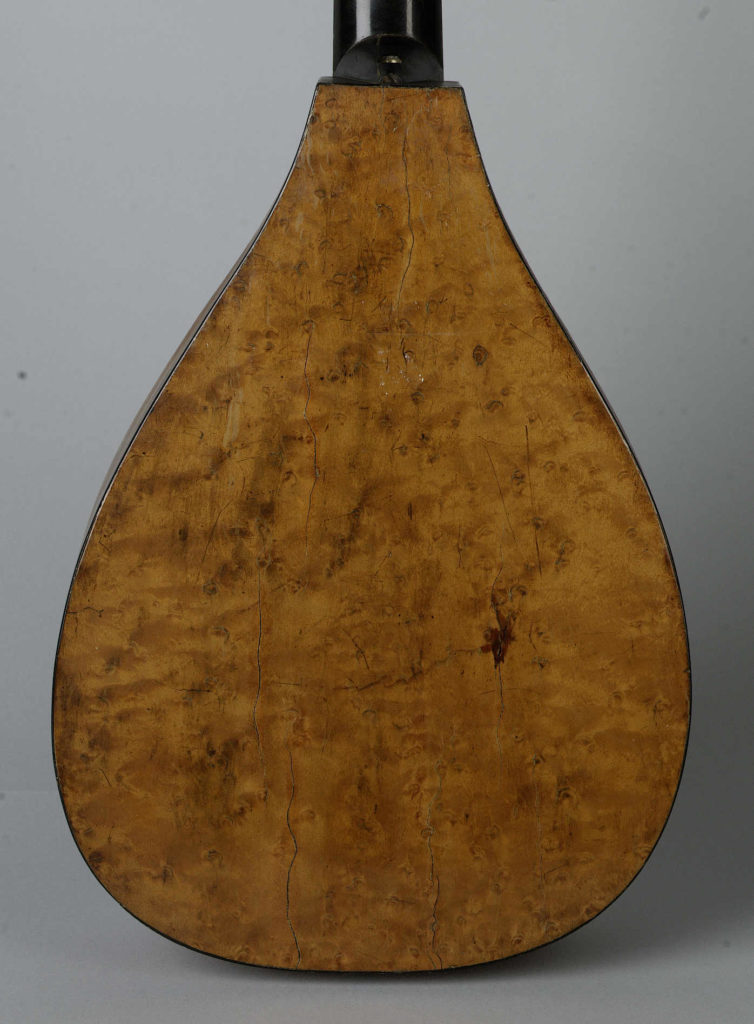 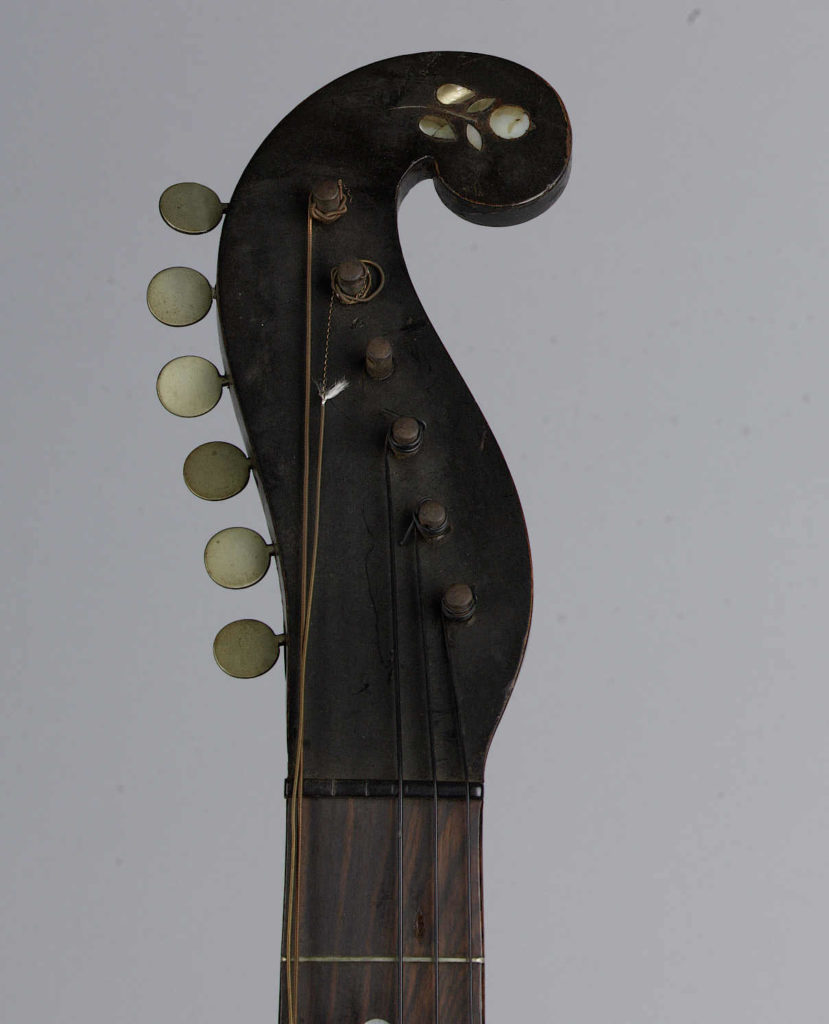 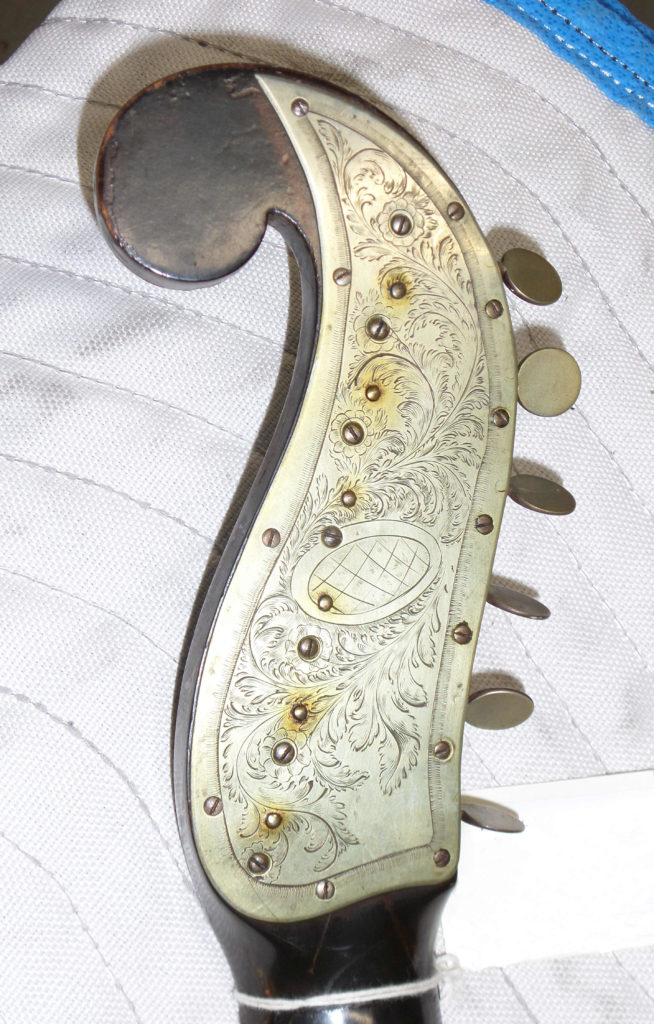 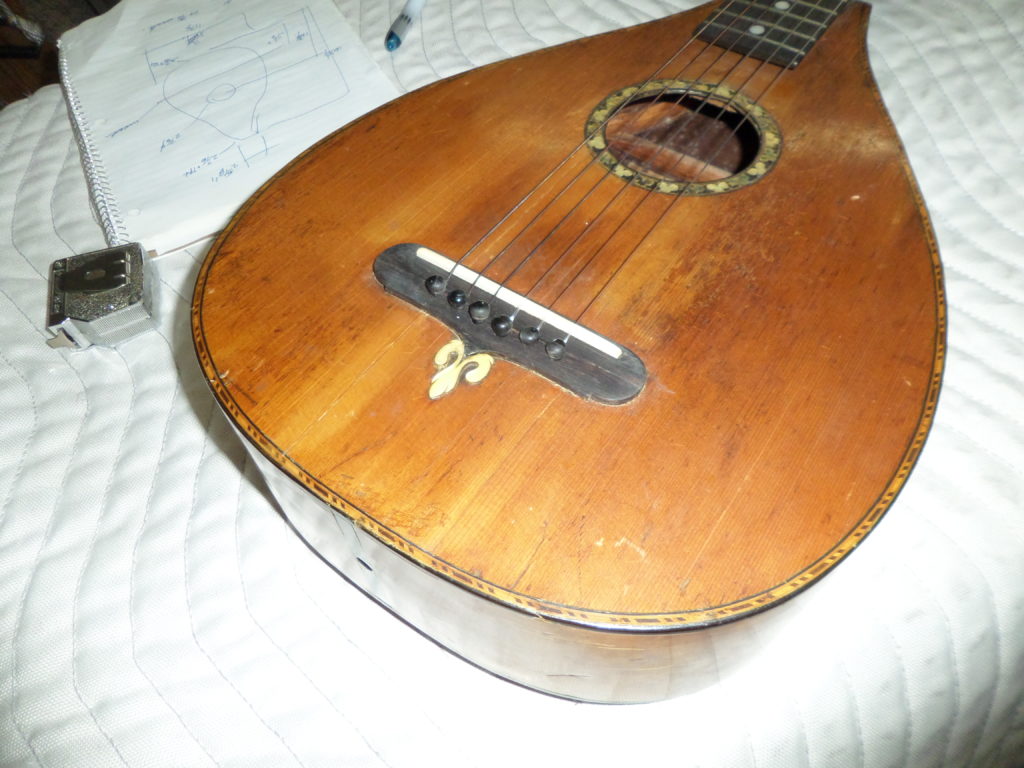 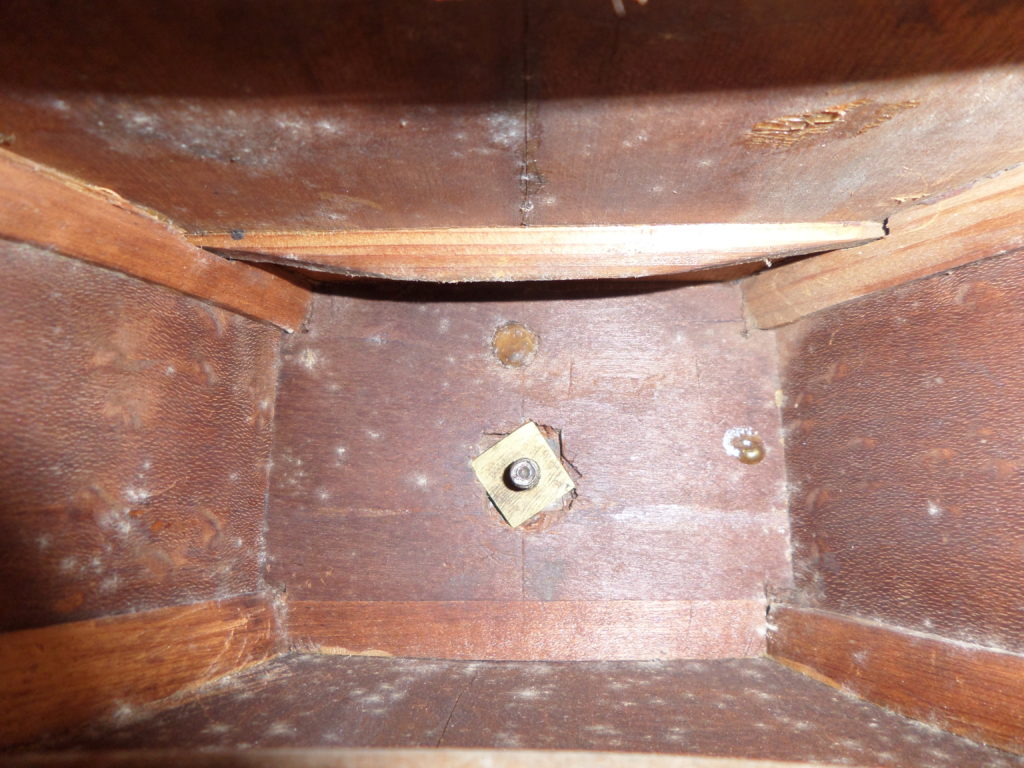 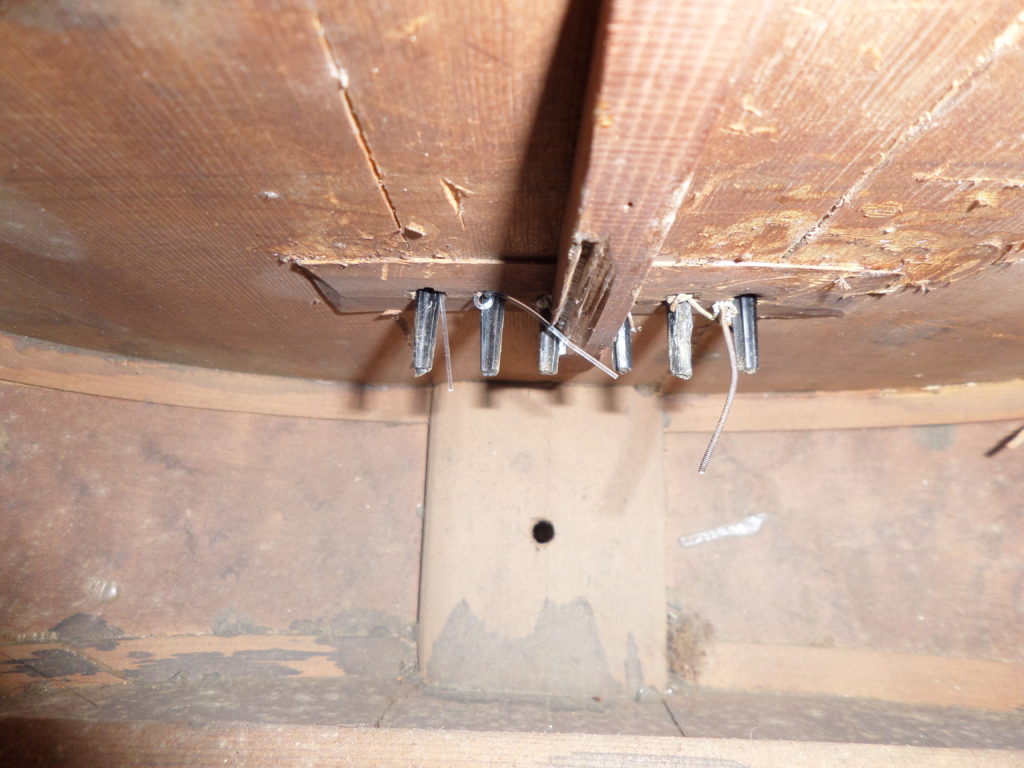 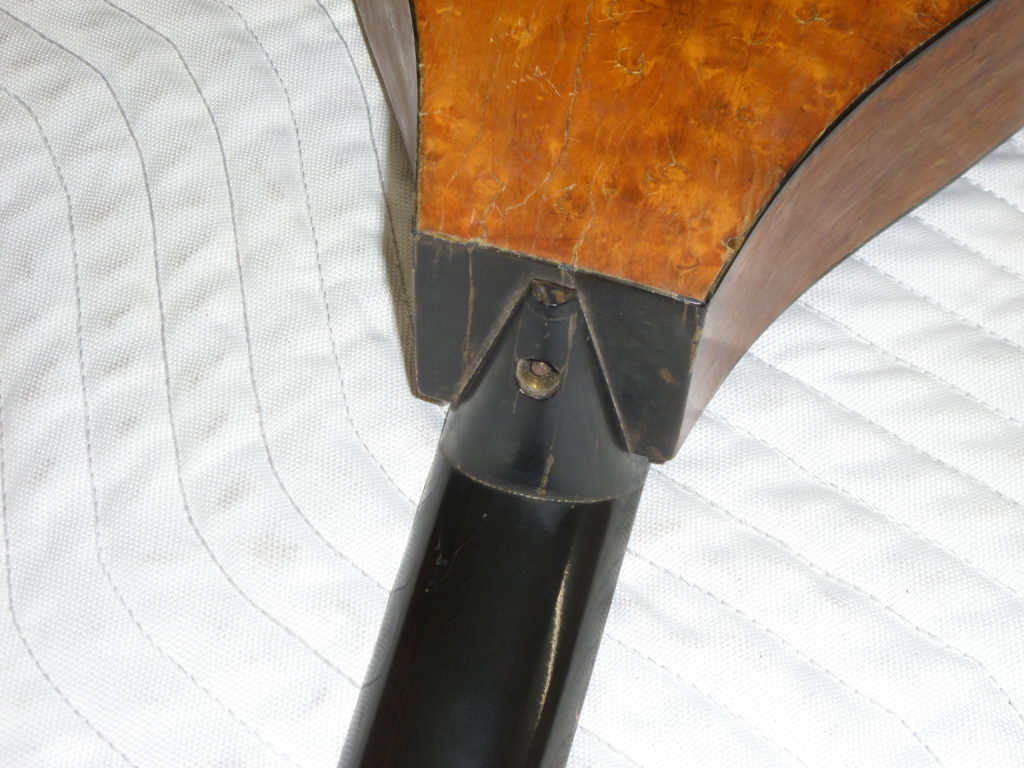 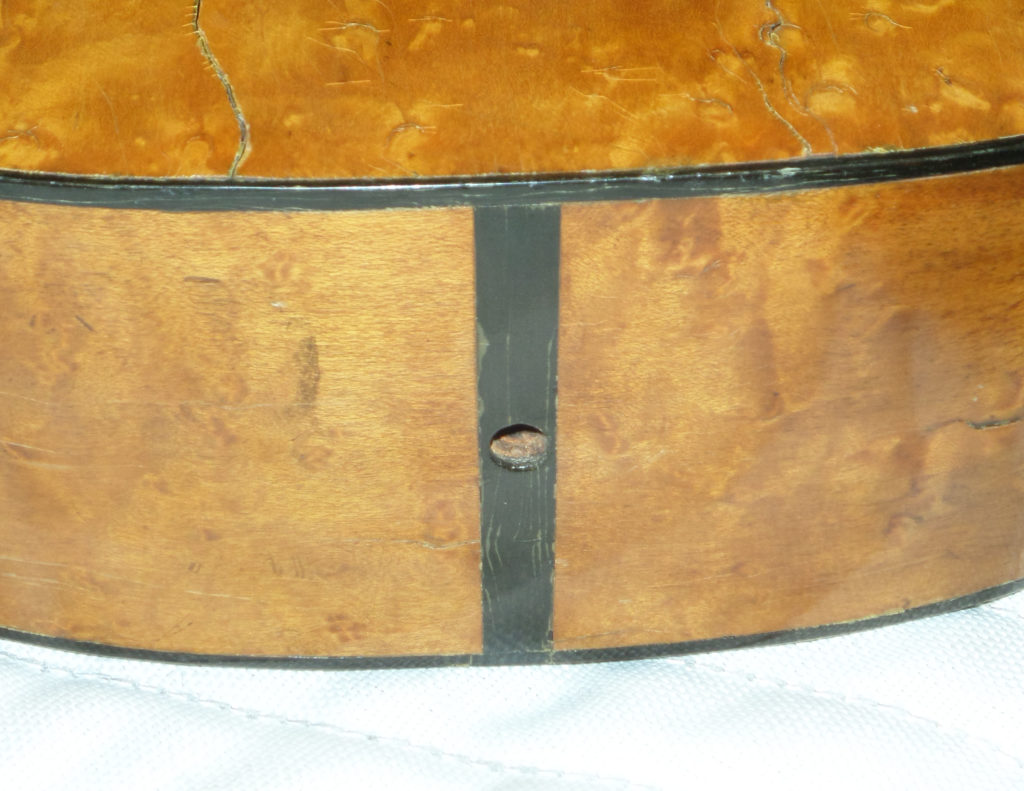