C. F. Martin Sr. formed a business agreement with John B. Coupa in early 1840 that gave Coupa the sale agency for New York City. The Martin & Coupa label was only applied to guitars sold from the depot at 385 Broadway. An examination of about 50 Martin & Coupa period guitars shows that 50% have a Martin & Coupa label. The remaining 50% were sold directly by the Martin factory to their already established customers and thus did not receive the label.

This guitar is one of the very earliest Martin & Coupa guitars and is also the earliest known example with the fully mature Spanish shape, that Martin used for all their subsequent 12-fret guitars. Martin guitars made between 1834 and 1839 were shaped like the Stauffer guitars from Vienna, not surprising since that is where C. F. Martin Sr. learned his trade. By the time this guitar was made Martin had dropped the Stauffer shape and embraced the Spanish style of guitar. For a brief period between mid- 1839 and very early 1840 Martin made a transitional shape that was no longer Stauffer-shaped but was not quite Spanish shaped (two examples are known).

(The chapter on dendrochronology in “The Century that Shaped the Guitar” (Westbrook 2005) convincingly demonstrates the top wood of early Martin guitars is European spruce. The only conclusion that can be drawn is that C. F. Martin Sr. brought a supply of European spruce with him when he emigrated from Saxony. All pre-1840 Martin guitars have  this type of top wood. This guitar is the sole example of a European spruce top that made it to 1840.) Since Martin made approximately 400 guitars between 1834 and early 1840 this must have been the extent of his original supply.

Martin & Coupa guitars were made for 10 years between 1840 and Coupa’s death in May 1850. Over that period Martin made many changes as he perfected his guitars and these changes can be used to help date Martin & Coupa period guitars, even in the absence of archival information.

The third photo below shows a couple of early features.

It can be seen throught the sound hole that there is a crescent-shaped piece of that forms the bottom of the neck block and extends to the rim of the guitar on either side. This feature is only seen on guitars circa 1840 to 1841, with only the earliest guitars having the piece of wood as thick as illustrated.

Although not illustrated the bracing is very unusual and is in the form of a two-strut fan brace.

There is only one “C. F. Martin New York” stamp on the guitar, on the back of the body near the neck heel.

Ivory veneer on side of the headstock

Brass Vienna mchines or, as Martin often called them,  one side screws. This type of one side screw differs from the type encountered on earlier Martins.

Extensive use of fancy purfling on the top, sides and back of the guitar 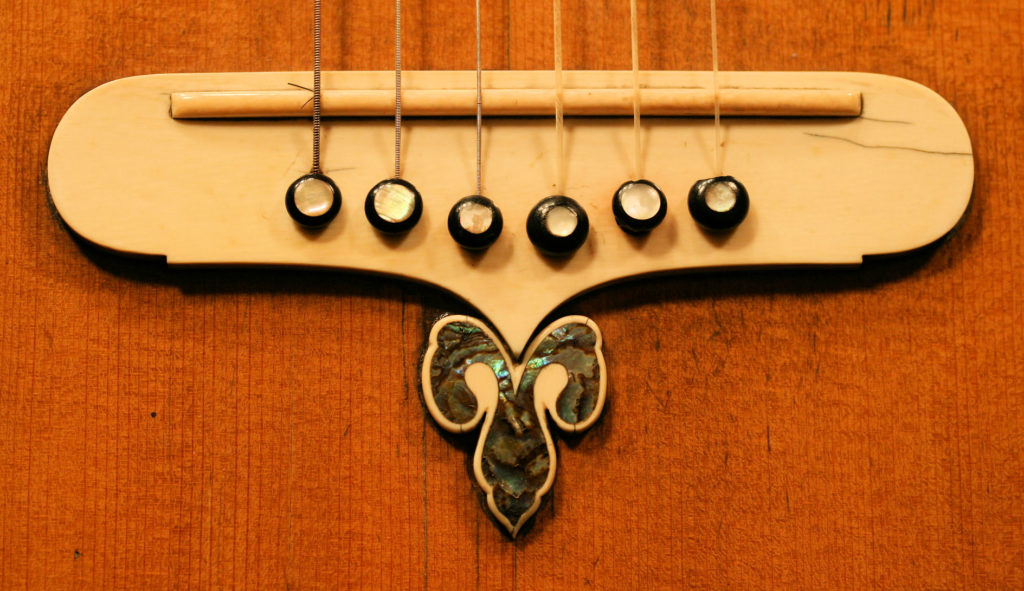 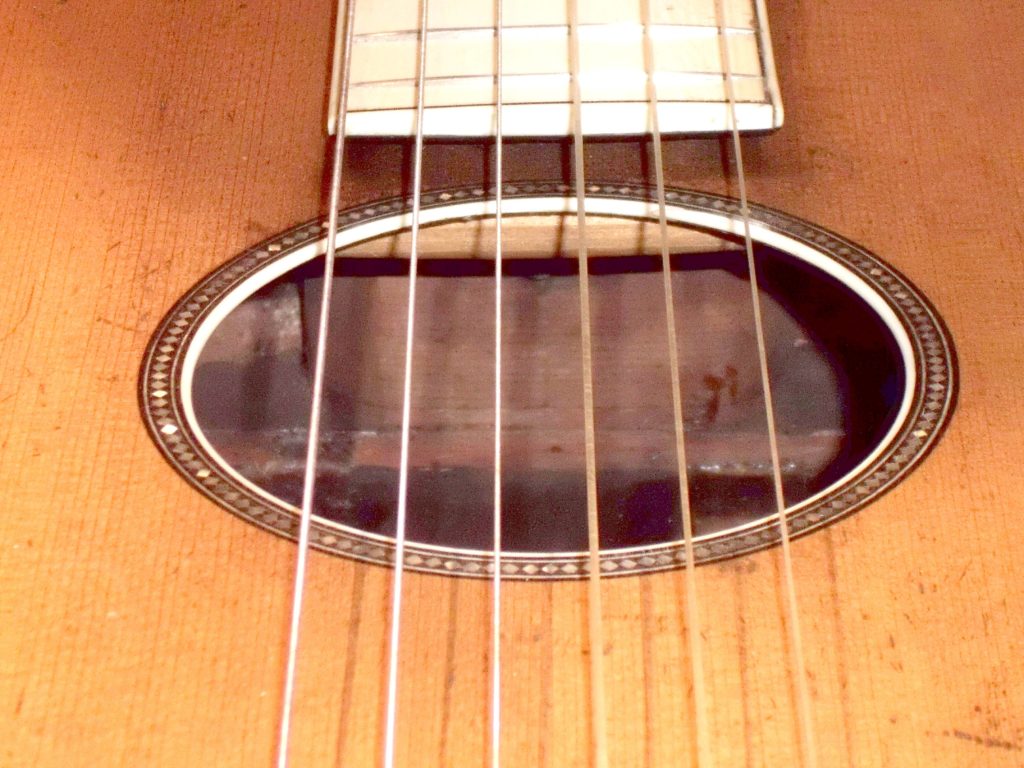 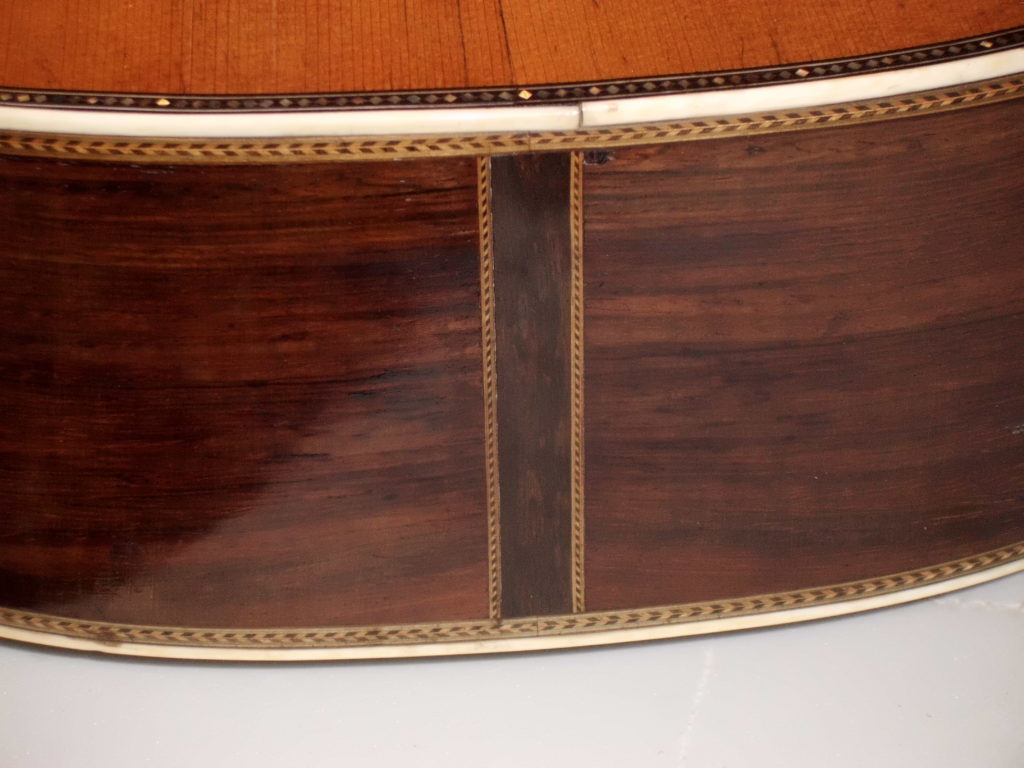 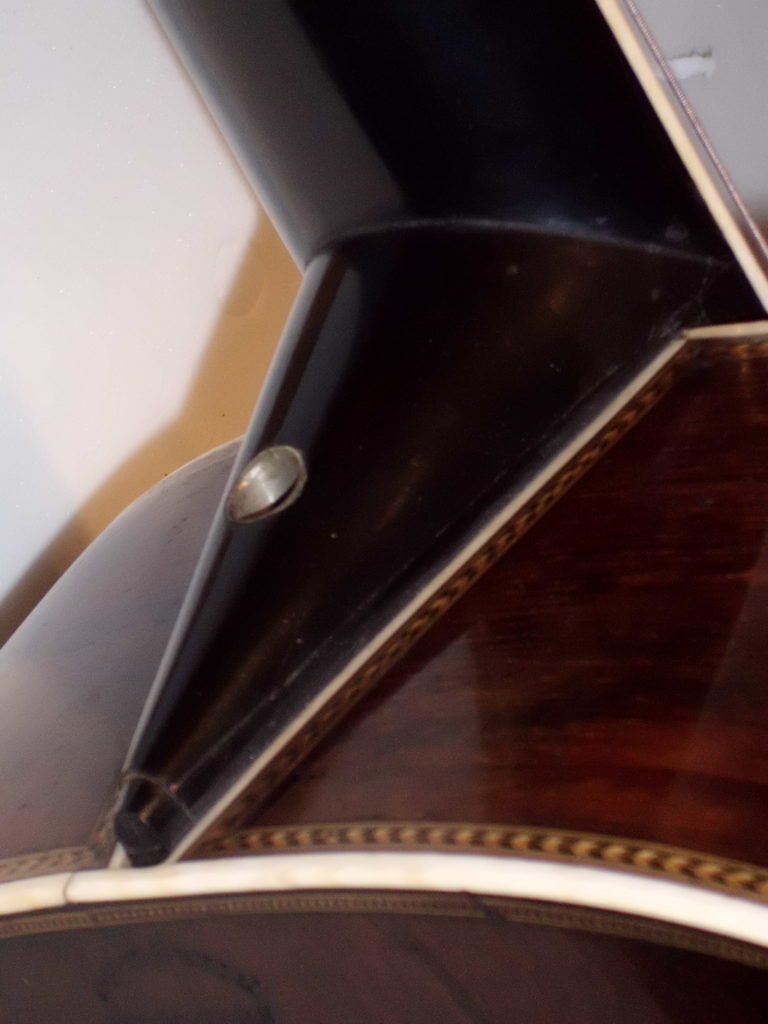 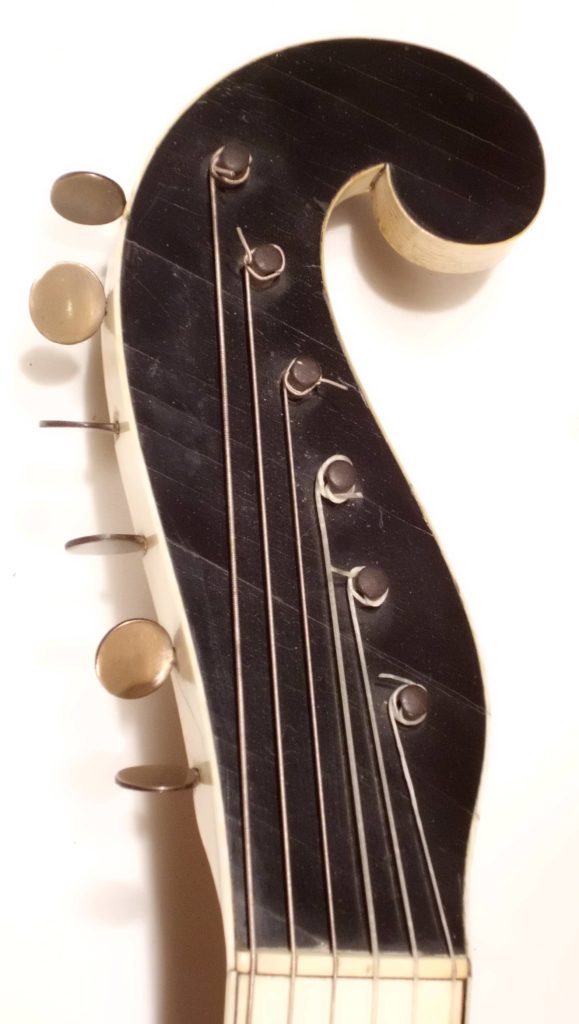 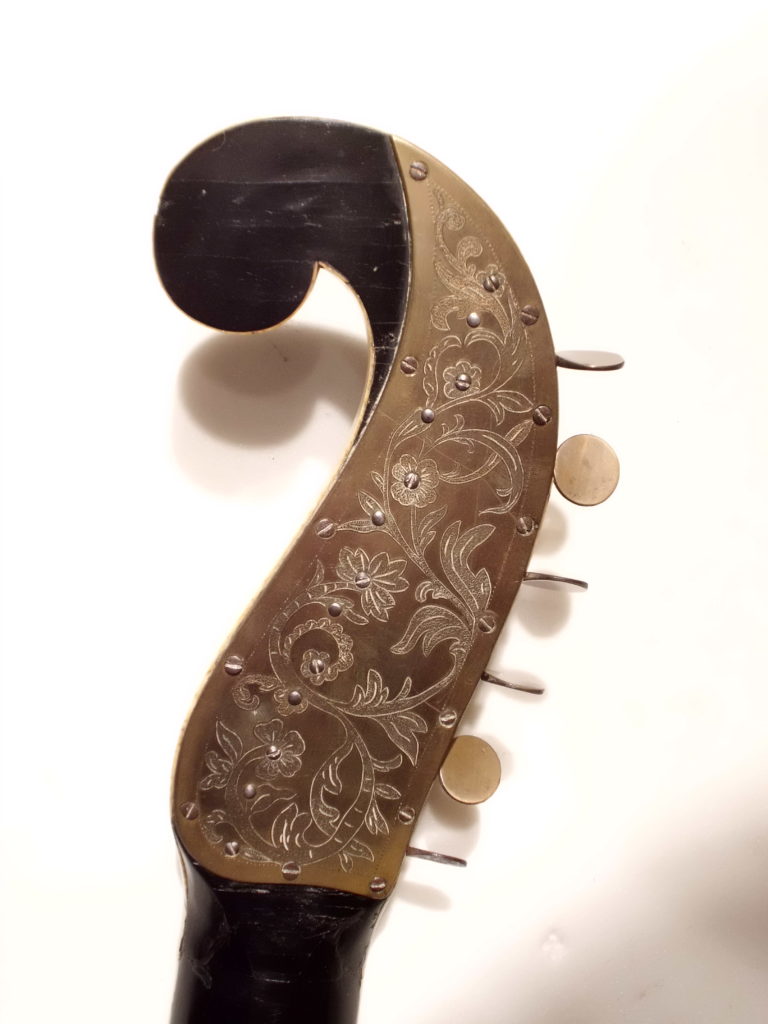 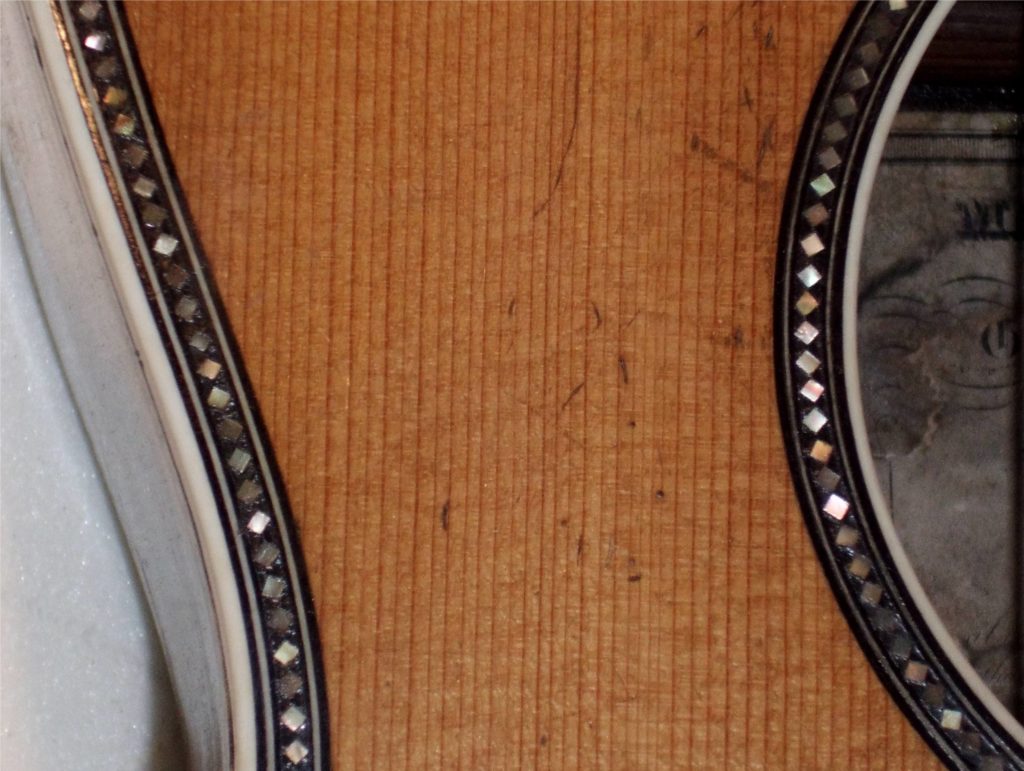 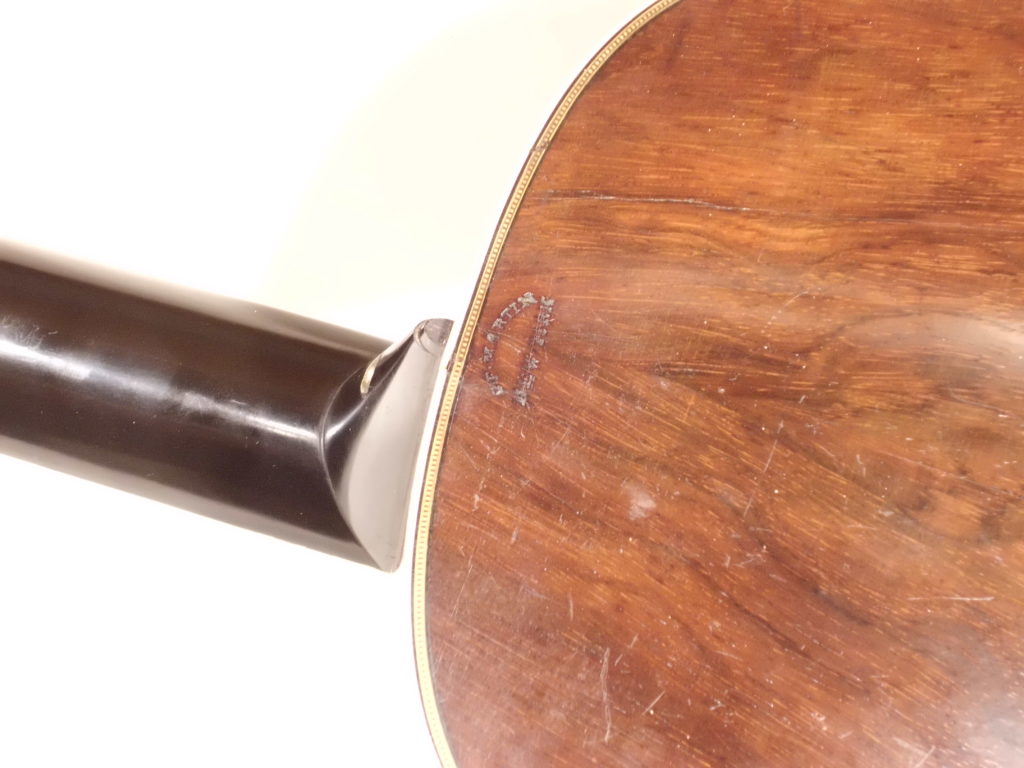 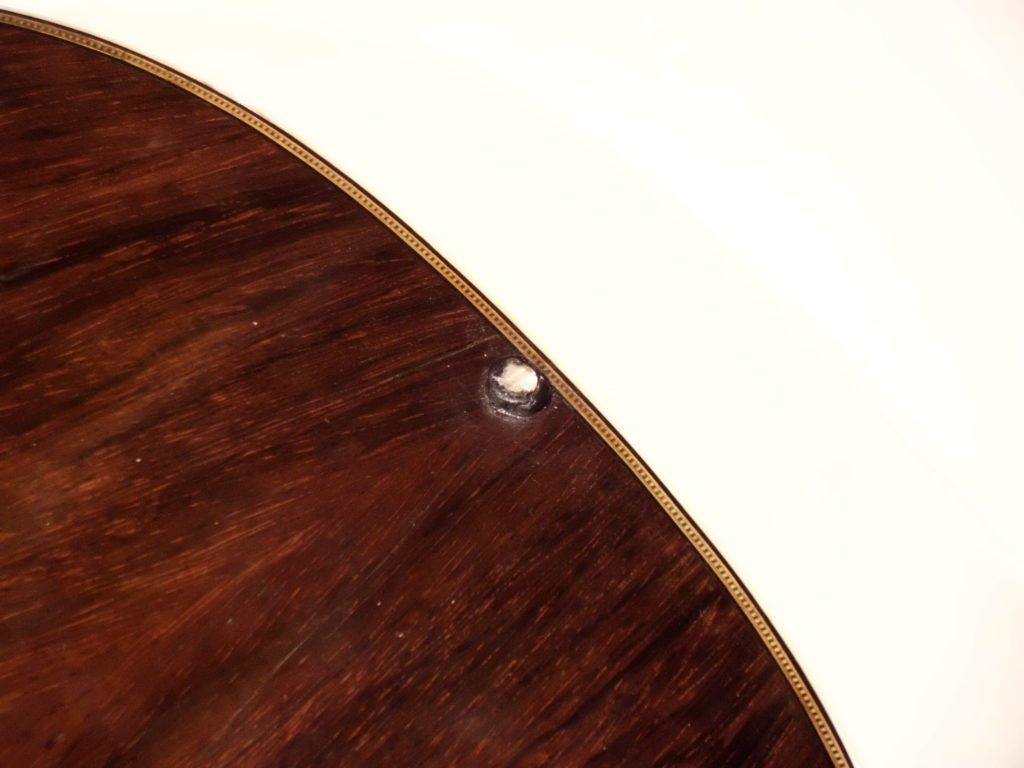